Over the last few years we have had an increased number of sightings of hedgehogs at Whinlatter. What can be nicer on a fine Spring evening than to hear a rustle in the bramble bushes by the lower carpark and watch a small snouting hog roll out on its quest for a forage feast of slugs and worms. It’s encouraging as it seems to be bucking the disastrous downward trend – a decline from 1.5million in 1995 to 500,000 in 2018.

Possible reasons include loss of habitat and food sources, increased predation by other mammals and deaths caused by road collisions.

Close by the car-park runs the road, not a major one, but still lethal to a fair amount of animals, squirrels, deer, birds. Some car owners use it as a short racing cut over the pass.

Last year a hedgehog was found on the tarmac near the Forest entrance and brought into the VC. It had had a glancing blow. Taking it on a last journey to the vet’s was the only option.  It has not been the only injured one by a long chalk.

Recently, The Forest Research arm of the Forestry Commission has been working in collaboration with other bodies to model hedgehog roadkill seasonal trends and hotspots across the British road network. This helps identify and map the worst areas for hedgehog road deaths, and then hopefully used to advise where measures to minimise the risk of hedgehog-vehicle collisions should be targeted.

The study found that around 9% of the 400,000 km of road in Britain is particularly dangerous for hedgehogs. Grassland areas, and the outskirts of urban areas, have the highest risk, and major roads are particularly hazardous, despite forming a relatively small proportion of the total road network.

Home in to have a look at where the hot spots are in the Lakes. 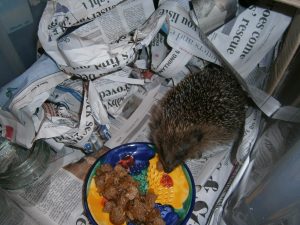