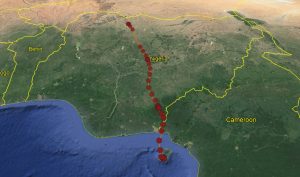 Flying to a different beat

Flying to the sound of his own wing beat; Self isolation may be advised for many but it seems to me that a migrating osprey puts itself into voluntary isolation for the duration of its journey, often up to a month.

Humans, as social animals, are inclined to be able to stand being in close proximity to others over their whole lifetime, starting with the nurturing process of bringing up their babies. Being apart and alone for any length of time is uncomfortable, but for many other animals and birds the opposite is true; physical closeness causes great stress, prompting aggression and fear. Although ospreys are more social in their wintering/non-breeding grounds than many other birds of prey, probably due to limited suitable fishing sites, they definitely do not have a touchy-feely relationship. A 2 metre social distance is minimum to maintain cordial interaction.

Very often when they return to their nest site in Spring we have observed that, although the urge to mate is strong enough to overcome their social reticence, when not engaged otherwise a pair will often stand on opposite sides of the nest facing away from each other for the first few days. Standing close to a creature with punishing talons, sharp beak and a 1.5 metre wingspan is a hard ask.

So, No 14 will be perfectly happy soaring the skyways by himself and only occasionally seeing another osprey at a distance at a fishing site or winging its way North. 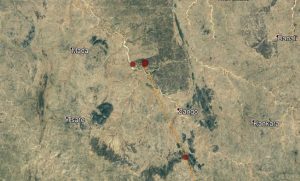 Northern Nigeria is the home of the Hausa people who have a very lively culture that is evolving into some more modern dance and song. In fact, brought to you virtually, here is Adam A Zango, from Zango itself with a typical street scene and some up-beat and  pretty cool moves.