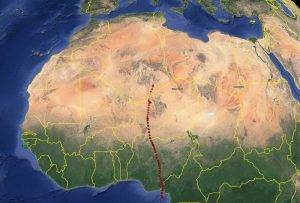 Niger – pronounced with a soft g and a French accent. On the map it’s a pale khaki colour contrasting with the emerald forests of Nigeria and translating into a reality of dry desert waste, sand and rock at the centre of the Sahel region. Landlocked, it is flanked with equally desiccated neighbours, Mali to the west, Algeria and the Sahara desert to the North, and Libya and Chad to East. It’s one of the hottest places on earth. Today it was 40C dropping to 24C over the 24hours.

It’s not a place for a fish eating bird to hang about in, so, he has pushed on fast.

On Friday morning March 21st he left Nigeria, and roosted that night in central Niger,

on Saturday March 22nd he roosted in the North of Niger

and Sunday March 23rd crossed the border to roost in Southern Algeria.

The clusters of red dots indicate the places. Not easy to find a spot safe from small nocturnal predators such as fennecs or sand cats. Niger is the land where they have built a metal monument to a dead tree, (it was in a place where it was the only one for 400 km in any direction,) so a sand hillock, rock outcrop or low scrub will have been his uneasy resting place.

Going North on Saturday he would have been able to see the rocky walls of the Air massive in the distance to his right. This and the Tenere desert to the West is a UNESCO site of 30,000 square miles.Wikipedia has some great pictures of a dramatic and barren landscape!

If he was very lucky he may have passed near a herd of the last wild Addax Antelope with their pale coats and elegant corkscrew horns. They have large square teeth for browsing tough vegetation and big feet and heavy dew claws to walk across sand. They get all their moisture from plants and only excrete dry faeces and concentrated urine. Owch! 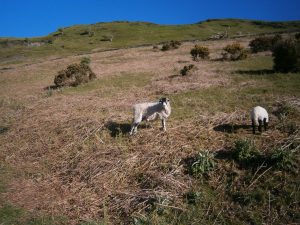 Tootling along with him will be migrating nightingales travelling to the Southern gardens of UK and whinchats,that we may well see on the fells this summer – if we’re allowed out!

Here in UK we have a very different human demographic to that of Niger. Ours is a long-lived nation that is age heavy, hence the measures to protect a large part of our population. Niger – in the wetter west by the Niger River is a country of children. There are 7.24 births per woman and average longevity only early 50’s. Pressure on land for food is increasing and as desertification of the Sahel increases both people and animals suffer and die.  Running parallel to No 14’s flight path the Agadez road South to North is a human migratory highway, carrying refugees from famine, war and slavery. I don’t suppose any of them will find a place to call home as beautiful as the Lake District.

On a lighter note, if you can get over the non-stop presentation to listen/inwardly digest, (use pause button a lot) I think this as good a potted Niger history as you’ll get.