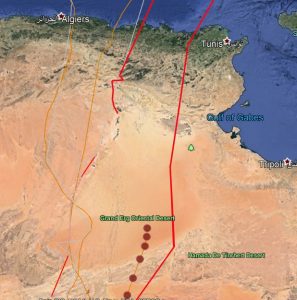 No 14’s journey now takes him over that part of the planet washed by the great dry seas of the Sahara, made up by arid mountain ranges, vast plains of pebbles and rolling sand deserts of wind created dunes. He entered the Grand Erg Oriental Desert on Tuesday 24th March, roosting overnight a third of the way over. If you travelled a distance similar to that of Land’s End to John of Groats you would still be within the giant basin of the Grand Erg Oriental and in all that time you would have seen nothing but sand and an endless horizon quivering with heat. It’s the last push before he can reach water and food.

Two days before and further South he was flying over the mountainous area of the Ahaggar and Tassili n’Ajjer National Parks. It is a land of dramatic sandstone pillars and forests of wind sculpted rock. Still stark and largely waterless, Tassili n’Ajjer bears witness that as little as 2000 years ago an osprey’s forbears could have fished and bathed easily there. Under overhanging eaves the smooth rock surfaces hold hundreds of paintings depicting scenes from as far back as 8000 years. They show the valleys running with rivers between groves of trees and a thriving population of wild animals, and people, dancing, hunting and swimming. The pictorial time line continues, mapping the environmental decline of the area. Wild animals are replaced by cattle which are replaced by camels until the desert takes over and the paintings cease.

Have a look at some of them.

Reminding us of our own pieces of neolithic rock at Castlerigg – this is a sight that migrating ospreys may be looking out for as they fly up the Bassenthwaite valley over the next few weeks. 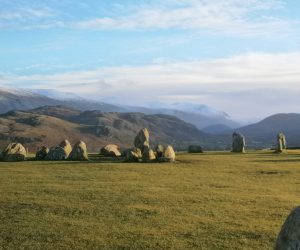