Nestling between the green fells, the blue line of Bassenthwaite Lake has a surface area of 5.128  km2. Ospreys can travel one end to the other in the space of minutes. The lake No 14 pinpointed as his destination yesterday is, in nearly every particular, different. 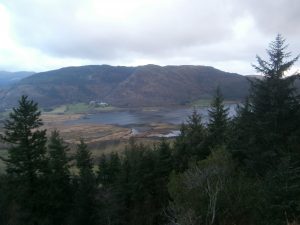 North Edge of the Sahara – Tunisia

Under cooler skies 15C he reached the edge of the Grand Erg Oriental Desert and in a zig-zag course veered slightly Northwest to visit the Chott el Djerrid, The Lagoon of the Palms. It sounds like a good choice. It looks wet on this map.

However, he may have been in for a huge disappointment as Chott is a Salt Lake – the largest in the Sahara with a water surface area ranging from 7000 km2 to 0km2.

In winter, run off from the Atlas Mountains fills the below-sea-level basin with brackish water. In summer, this evaporates leaving a dry sea of silver, pink, purple and orange salts glittering with eye-watering intensity under the sun. Around the level margins of the lake there are no green plants to be seen except patches of the salt tolerant date palms. Instead, roadside traders sell ‘desert roses’ with their delicate petals of gypsum and sand. At no point can a fish exist in such a salinated environment.

From the flight path it looks as if No 14 may have found a pool at the edge of the Lake at between 09.13- 09.26am. Perhaps he had a quick plunge or bathe but then he went on straight North, aiming for the coast.

Why the zig -zags? 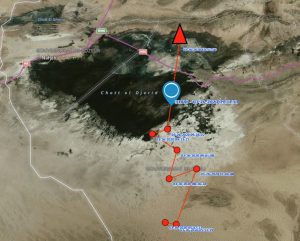 One of the things to remember about trackers is that they can pin point the position of the bird on the map, but they can’t tell you why a bird does one thing rather than another. So, when there is a zig-zag line of flight, as in the first map, we have to make guesses.  It would seem that he had made a decision to fly towards Chott el Djerid but was doing it in short hops with a short stop at each of the red dots. There was not any strong winds forecast and there are no valleys to dictate his course. Perhaps he was flagging a bit and needed a breather.

Of course, it might also be that he found himself in an ‘Arabian Nights’  scenario, seeing castles in the air, following a visitation from the Fairy Morgana.  Not impossible!

The optical phenomena of the Fata Morgana occurs when there is a thermal inversion – often occurring after a night of clear skies when surface temperature drops. It is particularly prevalent here as the cold air puddles in the empty lake basin. As the sun comes up creating a warmer layer over the cooler one an atmospheric lens is created so that objects at a distance are reflected, often upside down, in a mirage. Fata Morgana are a complex type of stacked mirage, weaving a moving magic in the air. Can birds see them and be allured by them? Who knows?

Prosaically, his erratic path might after all be a data error. Mystery! 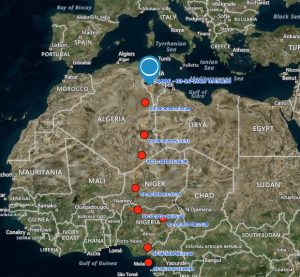 Listen to Scheherazade telling the stories of desert, sea and adventure in the music of