Suddenly, the map changes from Khaki to Indigo and Viridian; from colours of death and dehydration to the colours of life and good fishing. 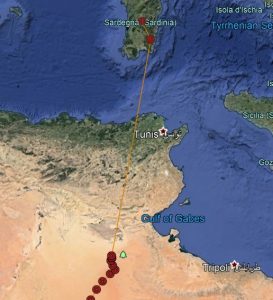 No 14 has had a couple of nights of respite in Tunisia  and then made a very early start on the morning, Sat 28th March 2020, to get him across the 132 miles of the Mediterranean, sensibly island hopping to Sardinia. He arrived at 06.00 travelling at about 30kph at an altitude of 505 metres. (the first red dot on the Sardinia map.) Close to Lake /Largo de Malargia 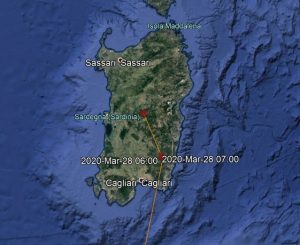 Economic development of a country is usually detrimental to its wildlife but in Sardinia the advent of tourists has been most beneficial for passing ospreys. Previously this rocky island had only one large lake. This gave the authorities a challenge to find enough water for visitors to squander on drink, showers, and toilets. The result is a series of 57 dams, often with hydroelectric associated.

For example the Lago de Coghinos, dam, combines utility with a relatively new ‘green’ feature to help eels move up and down .

At 09.00am, at the second red dot, No 14 was flying at an elevation of 1,260 metres just below the highest point of the island, the mountain Punta la Marmora 1,834 m.  and he will have passed over Lake Coghinos soon after that- watch out eels!

A comparable program in the Lake District can be seen in the Ennerdale Valley with the efforts being made to re-instate the Arctic char and provide a way upstream to their gravel spawning grounds. From a handful of fish left in the early 2000’s their numbers have risen to over 300.

This 2014 video tells the first part of the story and features our own Wild Ennerdale Forestry Ranger, Gareth Browning. Hurray!

It’s got to be, Sardines for tea.

No14 may be lucky and pick up an energy rich sardine by the coast this evening but they are generally found closer to the surface of the water, eating plankton in the warmer months.

Interestingly, sardines do not feature in the Sardinian’s top ten traditional cookery recipes. In the past the people were too busy avoiding the waves of Romans, Vandals, Byzantines, Barbarians, Saracens, Aragonese, Spanish, and Austrians, to live anywhere near their coasts.

However, try this for a taste of the Med. with a couple of tins of sardines from the cupboard. 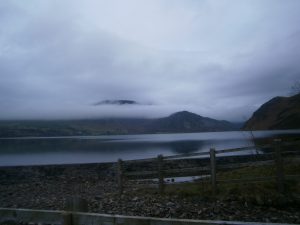 Ennerdale Water from the Dam