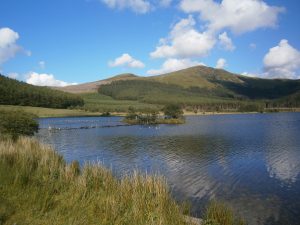 The Lake District Osprey Project is lucky in that one of the Rangers has his house in Whinlatter forest and has been able to use his hour’s exercise on some days to monitor what is going on in the Bassenthwaite Valley. Volunteers living around the Lake side have also been reporting their sightings. But there is no doubt that this information is fragmentary compared with the daylong watches that have been the norm over the last 20 years from Dodd.

So, to round up what we know so far – For the past 10 days osprey activity has been seen, with two birds flying and mating around the nest platforms near the Lake. Were they passage birds or previous residents?  Repeated sightings have led us to think they are possibly/probably the pair that bred last year;  Unring, the male who first bred 2013, and a new female that turned up last year, whom we think is also unringed. Without a camera the finer details of their life this season will be curtailed. But daily observations from the Ranger, taking time to look at other osprey sites on line – we can all do this – and our own long experience should make it as usual, an interesting time.

We have had reports too of fishing at Cogra -again from a local resident using the hour’s exercise usefully.

This clip was taken on March 30th by Lee

(If you don’t do Facebook, look at the picture of Cogra above and imagine.) 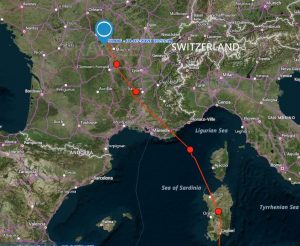 There are two maps that show no 14 setting off cross country early morning on April 3rd. At 05.53 crossing over the Canal du Berry near the villages of Augy sur Aubois and Nueilly en Dun  and at 08.19  near St Armand Mont Rond.  It would take an hour and 28 mins cycling, so he’s taking his time. 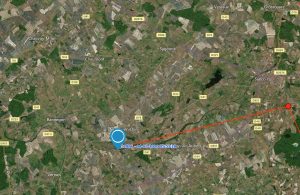 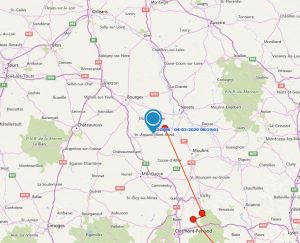 This is an area that no 14 knows well – if we believe that ospreys hold maps within their heads. And talking of holding maps in heads or within the ‘brain’ of the internet, here’s a couple who take human migration and perambulation beautifully. This will be the sort of view that No 14 saw, from their pictures along the Canal.

In past years he has slowed his flight down around both here and spent time feeding and resting at the Lac du Mont Belier, a bit further South. This little highland Lake looks a bit like Cogra Moss , in slightly more wooded agricultural setting. Pete says that it is favoured by passage ospreys  – so must have a good fish supply and is also only a day’s journey from  that area of France holding their greatest number of breeding ospreys.

Looking at other ospreys’ flight patterns we’ve seen that many of them will spend time, perhaps only a day or two’s flight from ‘home’, just loafing around, after marathon flights over Africa and Europe. Is this to do with wind direction, or that they are not in full breeding condition, or simply feeling a bit tired? Making a decision to rest but not getting back to your nest territory in good time is a bit of a gamble it would seem. On the plus side, when you do arrive you will be full of vim and vigour, ready to start off the breeding season. However, other hopeful ospreys may have arrived before you and be making themselves at home in your territory, possibly with your partner. There will inevitably then be a lot of energy expended on regaining the ground you have lost or perhaps being driven off.

However, even if you have staked your claim, others may challenge that and yesterday  after a large bird with a white flash on its wing was spotted further down the Bassenthwaite valley in the morning our Ranger watched an aerial battle  in the afternoon as an intruder osprey attempted to land on the chosen nest platform of the pair. He did not succeed. Hah!