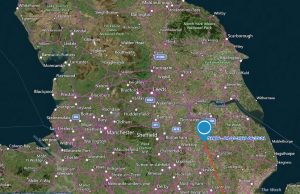 No 14 did not hang about in N. France, despite the lure of over 20 nest sites in the Forest of Orleans, (the biggest National Forest in France) well within his flight path.

French ospreys have had as rocky a history as that of the UK, culminating with their extinction in the late 19th century, a bounty being paid then for every osprey killed.

However, since 1972 they have been protected, as have all birds of prey.

Their success in the area just South of Paris is due in a large measure to the work of one man – Rolf Wahl. Originally from Sweden and a keen ornithologist he recognised the importance of the first breeding nest in 1984 near the fish-teeming waters of l’étang du Ravoir, also home to salamanders, newts and frogs – a smashing wetland area!  He is certainly regarded as the foremost osprey expert in France but he is best known to us in a practical way – the stress free ‘tea-towel’ method of weighing chicks, taken up by our Ringer Pete. 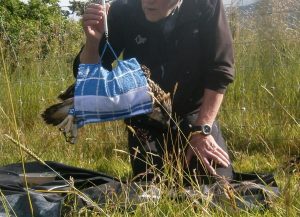 As well as the conservation and statistical information Rolf provides it is always good to hear about how people get to be involved in such projects in the first place. Here he has created a short biography: (You can generally get a google translation if you go up to the top right hand corner of a page)

And Onwards to England

How high must he be and from how far away can he see the shores of Britain whilst flying over France? 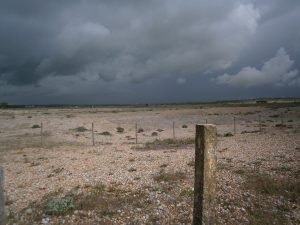 It looks as though he made the rite de passage and left France just East of Dieppe. He hit England scudding across just West of the wide sky-scapes near Rye Harbour Nature Reserve, one of the foremost conservation areas for birds in the UK, with its wild salt marshes. Below him the huge pale shingle and brackish wetland area would already be filling up with birds eager to start their families. Forty one species breed there in the Spring including 3 sorts of Tern, the Common, Sandwich and Little, this last one only the size of a starling. All three are masters of migration and will have flown at least 3000 miles, perhaps double,  from West and South Africa to return and find a nest site cuddled down on a wind-scoured shingle scrape. 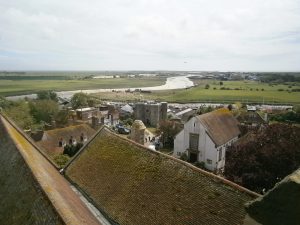 The view over the marsh from the steeple of Rye Church – an excellent spot to see migrants passing, with jolly good coffee shops to warm up at just below.

The download for April 5th shows that he had moved North and at 06.35 was flying just South of Gainsborough. near the River Trent. Would he reach his destination  by the evening or the next morning?