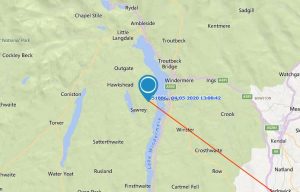 No 14 has reached his destination!

He started on March 17th, St Patrick’s Day in Bioko and ended on April 5th Palm Sunday in Cumbria, a journey of over 4000 miles in 20 days.

It’s something we can marvel at but even after years of research we don’t really understand.

Why do ospreys migrate?

In general it is thought that animals migrate to exploit food supplies. For example, the grazing herds of Africa follow the new grass cycle with the rains. The easy take on this is, Ospreys fly north in Spring to exploit the rising fish in colder Northern climes. Hours of daylight give longer fishing times to rear healthy chicks.

An explanation as to how this developed would be that during the last ice age, 10,000 years ago, ospreys were confined to the Equatorial regions where water did not freeze and fish did not sink dormant. As the ice retreated the opportunity to fish slowly extended North, and birds followed both for fish and to escape pressure at nest sites. Now ospreys make these huge journeys from end to end of the range. No 14 is a classic example.

But we are finding that although this will be broadly true, the dispersal pattern isn’t that simple. Our theories have often been based on observations of the low osprey numbers in Western Europe where there have been centuries of persecution. It is only now as they are returning over the area that their behaviours are posing us more questions.

Why don’t more ospreys breed in their wintering grounds in West Africa where fish are plentiful? The majority are migratory.

However, those in the Red Sea are pretty much resident all year.

Re-colonisation in the Mediterranean shows ospreys breeding in Corsica just moving a short way East to Spain in winter. They are over-flown by the long distant osprey migrants like No 14.

But then, a few of the UK breeding ospreys have been discovered ducking out of making the full journey and are stopping over in the Mediterranean in winter. So, it doesn’t seem as if the migratory instinct is quite so hard wired in as we thought. There can be modifications or even a switch off if conditions change.

Arm-chair travelling with No 14 has been very exciting, ‘visiting ‘ so many wild, strange and exotic places that our bird will have seen with his own eyes and that we can follow and virtually see, through the power of technology. It is one of the great paradoxes of our time that we know and understand more about how our world works than at any time in the past and yet as we watch we are destroying what we love and what makes our world the fantastic, beautiful, terrifying, wonderful, bio-diverse,  home we inhabit.

Corona creates a further paradox as our inactivity drives down global pollution. There is a breathing space in the middle of the restriction and fear, to reflect and appreciate that we can live more simply and less wastefully than we thought.

And there is always the thought that however far No 14 has travelled and whatever he has flown over there will be very few areas of the planet that are as beautiful, verdant and spectacular as Cumbria and the Lake District. Attachment – overlooking Coniston Water

So, we really  hope that No 14, at 7 years old and in his prime, will get his act together and take up seriously with a female bird somewhere in South Lakes this year . We would definitely like to see his strength, intelligence and tenacity passed on to the next generation and many of his baby ospreys colonising both North and South of the county.