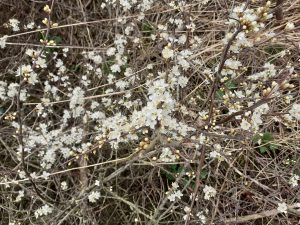 We had hoped to bring you news of Easter eggs with the osprey pair on Bassenthwaite. They had been here for over a fortnight so a first date for that happy event could have been over that weekend.  However, nothing happened during the night, so this is not to be!

Easter is always a good time to consider the miracle of new life and new hope. For ospreys that is a double miracle. There is the one that happens every year with individual pairs; eggs being laid with the promise of a future generation, and there is the one for the species, within our lifetime coming back from extinction in the UK.

It has not happened easily. The mindset of a nation has had to be turned, from seeing birds of prey as a menace, to seeing them as a vital part of the eco system and beautiful in their own wild right.

So the third miracle is, that it is in the small things each of us do that can turn a nation, or a world from one course of action to another. It has worked for Ospreys.

It can work for anything.

Coming back to the two miracle birds in the Bassenthwaite valley, they have not been idle in the beautiful Spring sunshine. Our Ranger and local Volunteers, using their hour’s exercise to good effect, have watched them mating and bringing in sticks to the nest platform. A sharp eyed individual saw one of them swooping down amongst the trees and breaking off dead branches. This is classic osprey behaviour as they don’t like settling on the ground, but it can be tricky because if the branch twangs instead of  snapping there can be a sort of boomerang osprey effect.

Other watchers have seen the continuation of the hate hate relationship between the birds and crows, whose territory is nearby, with some aerial battles. Another action high spot was when an intruder osprey attempted to land on the nest – probably with conquest of either nest or female on its mind, but it was seen off with gusto. So, with all this action and excitement it’s not surprising that the female hasn’t quite settled down to lay eggs. 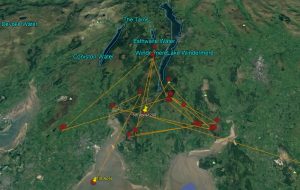 In South Lakes No 14 is obviously over the moon to be back in his old stamping grounds. Taking up from where he left off last year he visited all the other osprey nest sites in Lakes Peninsulas  in quick succession. We suspect he is the Rhett Butler of the Southern osprey estates as he seems to enjoy seeing how much mayhem he can cause at each established territory, causing lots of screaming and shouting from the avian owners, and then he’s gone with the wind. No signs of a Scarlett O’Hara for him in the offing though.

The map says it all.

If you like the idea of a virtual walk by the shores of Bassenthwaite Lake by St Bega’s this is a good one.