We are over the moon because, at long last, the pair of birds nesting by Bassenthwaite Lake have produced their first Egg of the Season. 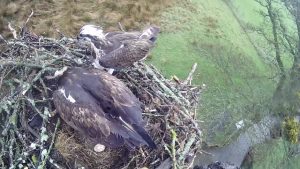 This image is of a first egg laid at Bassenthwaite in a previous year with parents KL and Unring -slightly different weather!

The female’s behaviour was observed to have changed radically at 16.00 hours on Monday  April 20th by local sharp eyed Staff and Volunteers on their exercise walk.

From the footloose and fancy free ‘honeymoon’ period where she had been seen flying about the valley, mating with the male bird and collecting nest material, she is now sitting solidly in the nest cup.

The two birds arrived at the end of March, so we were hoping to see a first egg on the Easter weekend. Generally, if all is going well with the courtship, eggs are expected 13 or 14 days after arrival. However, this year, the romance seemed to be a bit off and on the boil. A couple of times the male bird was observed to be mantling fish – holding it under his wings – and not handing it over to the female. As fish is the equivalent of giving chocolates for ospreys, both for bonding and protein, it is perhaps not surprising she was a little tardy in producing. The male bird seems to have got into the swing of things now though and is bringing fish to her on the nest.

Usually ospreys lay 2-3 eggs at 48 hour intervals so it’s to be hoped that by the weekend she will be sitting on a full clutch with the long haul of incubation lying ahead.

At this period it is critical that these Schedule 1 Protected birds are not disturbed, and the clutch not jeopardised.  We would ask that everybody enjoys the ospreys, through media, news and updates, from the comfort of their own homes, observing the government guidelines for exercise and social distancing.