The Life and Death of Green 5Y 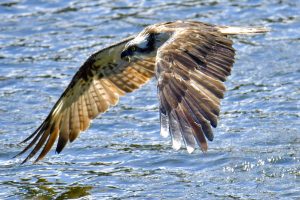 Over the past week there have been great highs and then a huge low concerning the life and death of Bassenthwaite osprey Green 5Y.

This is as full a story as I can get, starting at a bit before the beginning:

The advantages of Ringing

Ringing a bird has always been one of the least invasive methods of collecting data on its movements after it has left the nest.  The LDOP has tried to ring all chicks every year since its inception in 2001. At the age of 5-6 weeks these Schedule 1 chicks are taken by a licensed ringer from the nest and in the space of half an hour are given a visual health check and are weighed and measured. Two rings are placed on their legs.  In England, the left leg bears a metal BTO ring with the unique serial number of the bird stamped into it. On the right leg a larger plastic Darvic ring is placed with a letter/number/colour combination. Generally, with luck, this can be seen through a telescope, whereas the metal ring number can in most cases only be read from a deceased recovery.

Ring sightings depend on members of the public spotting them and sending their findings to the BTO, who then informs the ringer concerned. Over a number of years, a broad set of information can be gathered on the population movement and dynamics, but for individual birds sightings can be few and far between. At a watched breeding nest site, like Bassenthwaite, there are daily summer sightings, but then only sporadic and random information. This can be very frustrating when we send off healthy chicks and never hear anything of them again! We know about 70% never reach breeding maturity, but we can never be sure if they have failed or just not seen.

It is also important to note that unless cameras are fixed onto the nest site confirming the identities of the breeding male and female, is difficult and sometimes open to speculation, despite the birds carrying a colour ring and it’s even more difficult if they don’t.

Green 5Y has been an exception in that we have had bites at a history from his hatching in 2006 at Bassenthwaite to his sad death on April 23rd) near Brockholes Nature reserve in Lancashire.

Green 5Y was the offspring of the 2 original ospreys breeding on Bassenthwaite from 2001, No-ring (A very distinctive male bird with no rings) and female Green SX.

2006 was SX’s last year of breeding but as a bonus, she managed to produce, hatch and rear chicks from 3 eggs (previously she had only had 1 and 2 offspring). The first two eggs were laid on Tuesday 18th April at 05.30 and Fri 21st April – but the third was more difficult to verify but probably about 23rd April. Interestingly, George, the Forestry Commission engineer had tried to insert a mini camera on the edge of the nest for the second year running, this time with a cage around it to prevent accidents with sticks and talons, but by the time of hatching it was buried again in moss and branches.

By the end of May and the last days of incubation, the weather had turned bitterly cold, volunteers wearing gloves and woolly hats. On Friday 26th May we were on tenterhooks but relied on the protection team who told us that they thought the first chick had hatched at around 23.00. The big surprise on Saturday was that when we switched on at 10.00 a second chick had hatched at about 7.50 that morning. To quote ringer Pete Davies,

“We were already delighted at seeing one chick in the nest at first light and I couldn’t believe it when the second egg started to hatch. My heart was in my mouth as we watched the tiny chick struggling to break out of the egg. This is quite extraordinary because there is usually a full day between hatching – I’ve never heard of anything like this before.”

Then there was a wait until the night of Tues 30th when the last chick hatched in the night. Amazingly, the sticks by the mini camera had moved and much of the hatching process was captured on video film, which with the technology of the time was thrilling to achieve.

One of these exciting hatchings was 5Y – but we weren’t to know that at the time!

All the chicks thrived with the copious amount of fish that No ring brought in, although the littlest had to use quite a lot of ducking and weaving moves to get into a position to be fed, and avoid being bashed by its older and much bigger siblings. No-ring was seen to feed it exclusively on occasions.

On July 5th they were ringed and checked by Pete D, all behaving perfectly at ‘playing dead’ whilst SX called overhead. Ranger, Paul Brown filmed the occasion. The female bird was already big compared with her two brothers and her ring was Green XU. The other two male chicks were ringed Green 5Y and Green 5Z.

They continued to develop well heading towards fledging in July, the next big milestone. The weather had turned extremely hot and the chicks panted on the nest, despite their covering of feathers. On Thursday 20th of July at 14.35 in a haze of heat, the male chick 5Z took its maiden flight and promptly disappeared into the sultry air. It was spotted the next day, still out, but doing fine. On Sat 22nd July 5Y took its first flight in the evening, and his big sister took hers, again in the cool of the evening, on Sun 23rd.

As with all juveniles their first days in the air were full of near misses and clumsy landings but the female came on in leaps and bounds and on July 31st was seen catching her first fish. Her brothers were still doing circuits and bumps but as they grew bolder there were attempts when they ganged up to chase their sister to steal her fish. She was more than a match for them though.

By this time SX Mum was only coming into the nest at 2 or 3 day intervals, sometimes with a fish for the juveniles, as she prepared herself for the journey back to Africa.

Over the summer otters were often seen in the glassy waters and on the marsh. One perfect moment was viewed by many visitors and staff when 2 of the juveniles were bathing and an otter romped into their space across the boggy ground. It was a bit of a shock for everyone! Great white egret and marsh harrier had also been seen as high spots over the summer.

It’s not sure when the chicks left the valley as the human side of the Project stops at the end of August but by 27th Aug SX had departed and in the next couple of weeks so had the juveniles and Dad.

Now comes a gap. Ospreys generally spend a couple of years in Africa after their first migration to mature before making the return journey. Whether 5Z and sister XU survived no one knows, but in the Spring of 2009 5Y was once again seen near Esthwaite Water in the company of his half sister White YU. White YU was hatched in 2007. No-ring was her father with a new un-ringed female ‘Mrs’ was her mother as Green SX had failed to return in 2007. YU and 5Y made a nest on private land in S Lakes in 2009 and bred in 2010. It is probable/possible that they were the breeding couple over the next years, with YU as the female until 2018. In 2019 a female with no ring was seen there.

However, this year 2020, Green 5Y had not been seen in S Lakes although he was possibly on his way there. 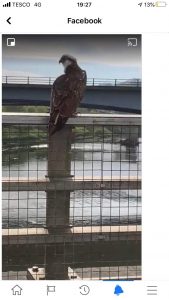 The M6 motorway runs closely past the Brockholes nature reserve, near Preston, Lancashire and although shut, due to corona virus, local people were charmed and uplifted when on April 15th 2020 an osprey was reported sitting on the motorway bridge above the River Ribble and diving off to catch fish. (Have a look at Google maps)

With hindsight this was probably not the ideal perching spot.

Darren Leen who works for Highways England’s traffic officer service from an outstation next to the M6 and A59 at Samlesbury recognised it as an osprey from his first sight.’ I was on a break at the outstation when I saw the osprey on a motorway bridge; it had been scanning the River Ribble for his/her next meal, sitting unfazed by 44-tonne vehicles passing less than three metres away.”

A number of people managed to get photos of him, including the images attached from Craig Smith. The bird had no Darvic ring, but it was noticed that he seemed to have a metal ring on his left leg, indicating he was an English bird. One picture was so sharp that the digits could be seen, and these were sent off to the BTO.

In a couple of days Pete had the confirmation that it was 5Y!

The questions this raised were many, not only where he had been but also why had he left a prime nest site? Was he pushed out by a rival male, or had he arrived late one year and found it already taken or do ospreys, reaching a certain age become more infertile with less urge to breed and go wandering. Fascinating!

All this detective work led to him having a moment of high publicity, featuring on TV. There was a lovely bit of film, but with the motorway traffic blurring fast behind him.

On 23.04 2020 watchers observed him sitting on the railing as usual, overlooking the River when a cyclist decided that he would make his way along the hard shoulder of the motorway – who knows why, being both dangerous and we assume illegal.

5Y taken aback, shot into the air, straight into an up-coming lorry.

Witnesses took photos of the cyclist, but he made it clear he had less than no concern about the incident.

Of course, it has been a great sadness to all others involved, particularly for those watching him in Lancashire and for us having found 5Y and lost him again so quickly. The set of incidents were random, but quite probably not that unusual, except in the witnessing. As we see daily from the many corpses knocked down on all roads, traffic and wild creatures are not compatible.  These are the words of the Brockholes team:

‘This news brings home ever more the need for bigger, better and more connected green spaces to allow such magnificent birds such as this one to thrive. Our conservation team work tirelessly to ensure Brockholes provides the best habitat for an abundance of different wildlife, but with surroundings becoming ever more industrialised, we need the help of wider organisations and the Government to provide a wildlife focused environmental bill which will make protecting species all the more prevalent in the hearts of the nation.’

However, for 5Y to have lived for 14 years of migration, breeding and overcoming all the other hazards of existence, his was a victory in its own right. He occupied a place at the top of the survival pyramid – his genes live on!

And we have that once in a 20-year history of a magnificent birth to death record.

We hope he finds himself by a safe river where the Salmon leap willingly into a hunting osprey’s talons. 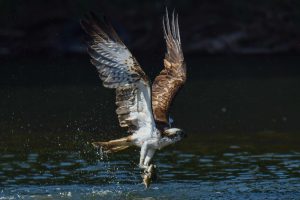 Sophie and Becky made the great efforts to capture and verify the Brockhole story and get permissions to use the wonderful photos.  And of course Pete who placed his leg rings on in the first place.