On a bright sunny morning at the beginning of this week our two juvenile Ospreys were ringed and fitted with satellite trackers. Roy Dennis, Britain’s best authority on Ospreys, came down from his home in Scotland to lead the team of expert ringers. The two birds were first given a quick health check and declared by Roy to be “two very healthy birds” weighing 1450 grams and 1670 grams. The first being a male bird and the second a female bird – female birds of prey tend to larger than the males – they were then ringed with a white ring on the right leg. The male is now White 14 and the female White 15. They were also fitted with satellite trackers so that their futures can be monitored.It should be noted that all the above procedures are carried out under rigorous government licence and that the disturbance of Ospreys on the nest is an offence under the Wildlife and Countryside Act 1981. 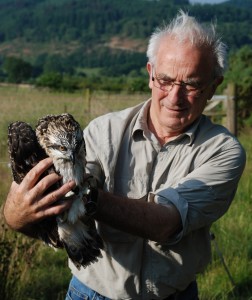