The LDOP learned this week of a chick which fledged from Bassenthwaite in 2008 and is now breeding in Cowal, near Dunoon in Scotland.  Along with an unringed female, it has raised a brood of two healthy chicks.  The bird was ringed on Weds 9th July 2008, at a nest in Dodd Wood, and was fitted with a yellow identification ring 7V, and BTO ring 137115.  Not only is this the first Bassenthwaite osprey known to breed North of the Border, but is a first for this area of Western Scotland for over 100 years…great news! 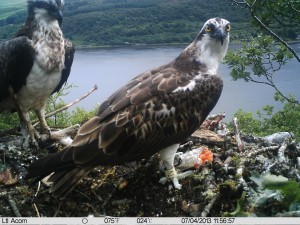