Number 14 is off !  He was over Derwentwater at 10am on Tuesday, and then continued South at a pace, and reached the Severn Valley by mid afternoon.  He crossed the Channel at the Isle of Purbrek  and probably roosted in Northern France that night. A truly epic initial journey for this young bird.  Yesterday he was West of Nates in Brittany at 15.00, and his signal last sent a reading as he was heading for the Northern end of the Bay  of Biscay. 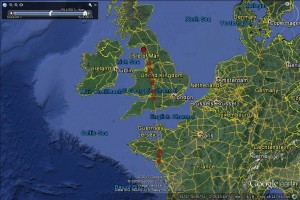