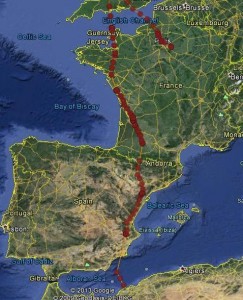 Our latest satellite download show that our young ospreys are making steady progress. Number 14 our young male has crossed the Pyrenees and entered Spain. He then followed the east coast south, almost crossing where we lost the signal for Number 13 last year and then crossing the Mediterranean east of Gibraltar to find an early roost on the North African shoreline west of Algiers.

Meanwhile Number 15 has progressed from Preston, like her brother following the M6 and M5 south down to Worcester. Here she took a different course and by lunchtime of the 16th was over the sea south of Brighton. After a two hour crossing she met the French coast near Dieppe.  By lunchtime on Tuesday 17th she was over central Paris, finally roosting just to the east.

This takes both birds up to their roosting site yesterday evening – Tuesday 17th September.