As of yesterday evening both our Ospreys were still on the move. Number 15 is still crossing the Sahara Desert but has now moved into northern Mali on a parallel track followed by her brother. She however has now spent eight days in the desert following a low but steady course.

Number 14 from his roost on the 2nd October has moved steadily eastwards. On the night of 4-5th October he roosted south-east of Yamoussoukro (capital city of Cote d’ Ivoire) but has since moved further east towards the border with Ghana. His last position was within five miles of that border. 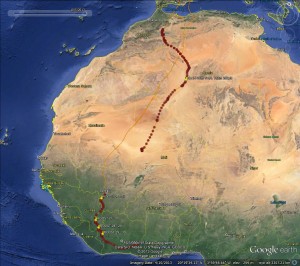