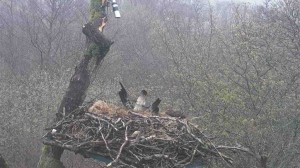 (Click on blue address to access video)
With another sunny day passing by KL seems to be quite happy to hold back on the egg front. Her mate, ‘Unring’ is doing everything he can to make life comfortable for her – as he has from the moment of her arrival. He has been catching fish- some really enormous ones- so that she is rarely seen without at least a tail end in her talon and he has spent a lot of energy bringing up manure covered grass clumps and tenderly strewing them around the nest cup.(Happily, the fertilizing element washes off quickly when it rains, leaving the hay behind) The nest cup is slowly deepening as he pushes and paddles it into shape with terrier tenacity. An incident on the nest today showed clearly how intently he is studying her needs. KL was waiting on the nest when he flew in with a slim jack pike. As she took it she also wrapped her claw around the end of a twiggy branch. Every time she attempted to move the fish the branch twisted around also until fish and twigs and toes were well tangled. At this point Unring who had been trying to see what was happening, deliberately leaned forward and gently jerked the twig free from under her. With fish and foot released she was able to spread her wings and fly off to eat it on a nearby branch. It was a touching moment – although more prosaically high investment in his mate should pay off in ensuring his genes have the best possible start in life.