The Lake District Osprey Project opens officially on Wednesday April 1st this year, with our volunteers manning the telescopes at Dodd and the CCTV at Whinlatter. No ospreys settling yet so the countdown is revving up for the arrival of our Bassenthwaite pair. Last year they were spotted on April 3rd (male) and April 7th (female KL) but of course with a 3000 mile run/fly up it is anybody’s guess when the first sighting of 2015 will be. With birds already in Scotland and Rutland all our beady eyes are fixed on the Lakeside nest and surrounds.
This season will be the fifteenth year of breeding and what a roller-coaster the experience has been!
It’s worth reviewing some of that amazing journey. Starting in 2001 No-ring and SX were the first breeding pair to make a permanent nest site in England for at least 150 years. Their first sets of chicks disappeared into the wide blue with the knowledge that even if they survived the journey we would not see them again for 3 years or so.
Elation – when one of our fledglings was photographed in Norway. Frustration – when the next few years were barren. Feelings akin to grief when our founding father No-ring and others have ceased their flight in this world. Wry amazement as our engineers found themselves chasing around the valley again wheeling out more yards of cable and setting up more cameras as the birds decided to swop sites.
Protection venues have ranged from ‘home from home’ huts to camping out on a 30 degree slope to standing up under an umbrella for the night.
The birds have given us all, visitors, volunteers, staff, so much joy, providing us with opportunities to tell fisherman’s tales (with arm gestures) of pike and salmon ‘that big!’ And there is no doubt there is nothing to beat the white wobbly cuteness of a day old osprey chick.
Then more recently there has been the break-through in technology where transmitters have become light enough for a bird to carry and we are filled with wonder as those same chicks navigate across the planet. More tales – of 1000 mile non-stop flights, ocean crossings, white beach idylls and death under the shifting sands of the Sahara.
And now, in the last two years, justification of all striving, both bird and human, with the next generation touching down at Bassenthwaite, South Lakes and West Scotland to produce their own chicks – and so the story goes on.
What will 2015 bring? Well, you’ll just have to keep reading the web or preferably, visiting the North lakes to see what the Bassenthwaite ospreys are doing for yourselves!
See you soon. 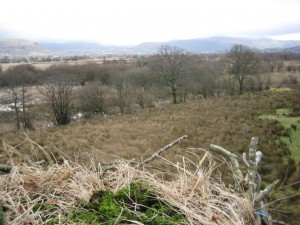