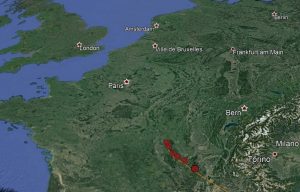 The Massif Central now rises across the flight path of no 14. It’s a tortuous uplifting of volcanic rock domes, cut by snaking rivers, and set with crater lakes, with its highest point the Puy de Dome, a volcano that erupted a scant 10.000 years back. 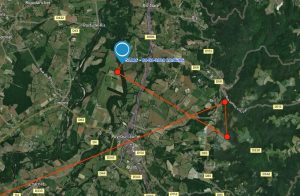 It is the waterways that hold most charm for a fish eating bird and on the night of April 1st No 14 could have been spotted fishing and then roosting – as many of us do at 22.00 – by the Dore River, just outside the small rural town of Puy Guillaume. In the evening maybe trout or grayling would have made some ill-timed forays to the surface after an early hatch of midges, with breakfast on April 2nd perhaps of a sluggish jack pike or perch hiding in the weed .

Over his journey it is water that has dictated his survival. As it dictates ours. It is one of the greatest challenges of our time as we see it changing from being an uncontrolled gift of nature to a paid for commodity. At every stage of this arm-chair journey people are being challenged by how they can access clean drinkable H2O, raising the questions; How finite is it? How fragile is its origin? Who controls it? Who gets it? How much does it cost?

Bassenthwaite Lake and Force Crag Mine

Back closer to home the water of Bassenthwaite Lake has been the subject of on-going monitoring and tests for quality. ‘Bassenthwaite Reflections’ was set up to address the failings and was intimately connected with the LDOP at its inception in early 2000’s. The osprey (No-ring at that time) was a top-of-the-food-chain, indicator species, regarding the health of fish and the Lake. From that initiative the new sewage works at Keswick now extracts phosphates from detergents, lessening algal blooms, local farmers are using less fertiliser, private septic tanks have been upgraded, tree and riparian planting has begun to stabilise banks, war is being waged on non native plants – such as Himalayan Balsam and Dubwath Silver Meadows is recognised as vital for mitigation of flooding.

Vastly more difficult was the problem of the poisonous seepage out of Force Crag mine into the catchment behind Braithwaite. A study for the Environment Agency identified the environmental impact from the metal mine as being one of the worst in the UK. 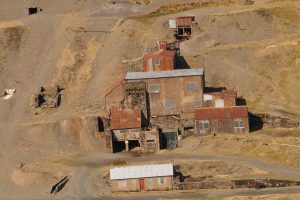 The Coal Board does not have an easy time at the minute as the detrimental environmental impact of fossils fuels is now all too obvious, but they have many  projects and unsung individuals who are spending their lives trying to make safe the residues and hazards of past workings

This report should bring more than Volvic joy to all the Lake users.