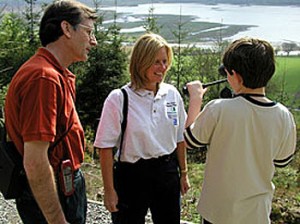 The Lake District Osprey Project is a partnership between the Forestry Commission, Lake District National Park and Royal Society for the Protection of Birds (RSPB) with fantastic support from many volunteers. The partnership aims to ensure the continued success of breeding ospreys at Bassenthwaite; to assist with natural colonisation elsewhere in the Lakes; and to provide visitors to the Lakes with the opportunity to see and find out more about ospreys and other wildlife sharing their habitat.

The return of ospreys to Bassenthwaite Lake in 2001 was the culmination of several years hard work behind the scenes to encourage them to breed. As sightings of birds on migration increased in the late 90s, so did the thought that one day these birds might breed once again. It was with this aim in mind that the Lake District Osprey Project partners built a nest platform in Wythop Woods overlooking Bassenthwaite Lake.

In 2001, all the hard work paid off and amid great excitement a pair of ospreys took to the platform and nested, successfully rearing one chick. For the first time in over 150 years, and as a result of natural re-colonisation, ospreys had been recorded nesting successfully in the Lake District!

The ospreys have returned every year since, swapping to a different nest site in Dodd Wood and then to one on the valley floor. In 2019, they moved closer to the lake. They have successfully raised at least one chick and often two chicks each year.

Currently, the project is funded by visitor donations, and support from the Nurture Lakeland, but operates at a loss which is shared by the Forestry Commission, RSPB and Lake District National Park .

If you would like to discuss ways in which you could help in the funding of the project, please contact Nathan Fox.

The project would like to thank the BBC, Viking Optical, and the Tourism and Conservation Partnership for their continued support.

In June 2008 the achievements and impacts of the Lake District Osprey Project were reviewed by Natural Economy Northwest in a Case Study. In summary the study found the following key achievements. 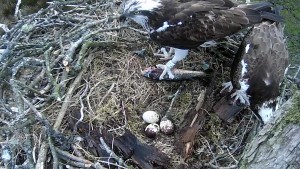