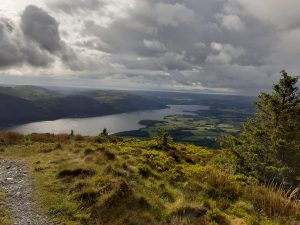 Top of Dodd – Sunshine and clouds in June.

With Staff and Volunteers all in Lockdown and subsequently unable to deliver the Osprey project there has been little news on the doings of the Bassenthwaite family over the past months. At the Dodd viewpoints there is no way that using communal telescopes can comply with covid restrictions. Similarly, gathering people around a screen to watch osprey footage is not possible with social distancing.

However, ospreys, like many other creatures thrived over a time when traffic and people were not there to disturb them.

Eggs were laid, chicks were hatched, fishing was good and the dry sunshine conducive to health and well-being. The two chicks this year looked very healthy. Their experienced Father Unring, now in his 8th breeding year, is a pro at delivering fish and defending the nest site. The female, thought to be the un-ringed one from last year, has taken to motherhood well, shading the young chicks from the sun and popping the right sized morsels of food down their ever-hungry throats.

The chicks from an early age showed a considerable size difference. Perhaps this indicated there had been an egg that did not hatch laid between them. Or perhaps the elder one of the two was a bigger female and the younger a smaller male. However, both were vigorous in vying for attention and in flapping and hopping about the nest prior to first flights.

Altogether, with pairs in South Lakes, such as Foulshaw, and those in Keilder Forest producing young, Cumbria is having a good year ospreywise!