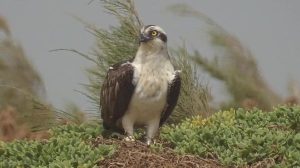 Over the past couple of weeks it has been all eyes to the skies watching out for ospreys passing overhead and ospreys that look as if they might stay and take up residence in the valley. So far there have been a number of sightings of passage birds but they have winged their way on past going North to Scotland. Around the nest platforms there have been the usual excitements of buzzards and crows having some argie-bargies as they jockey for their own nest territories in the area.

Looking at last year’s satellite maps  there are many factors that can effect the date of arrival of migrating birds. Africa is a huge continent and start points can be anywhere from Equatorial Guinea, c4000 miles from the UK and Senegal c 3000 miles. Some canny birds are only making a short hop from the Mediterranean, where more are now spending their winters.

Weather too plays a vital part, particularly the wind strength and direction. An adverse wind near ground level will be avoided by an experienced osprey if there is a good tail wind at a 1000 feet.

Some excellent news is a report Yellow 7V, of one of the Bassenthwaite offspring hatched in 2008. After leaving the Lakes on his first migration this bird was next seen in 2013 at a nest site in Scotland, where we believe he has been breeding ever since. He hatched from a fortuitous clutch of 3 brothers and his sibling is White YW who has been breeding at Foulshaw and has recently returned to breed again this year. 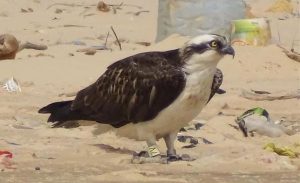 in Senegal by John-Marie Dupart, who has kindly given permission to use his pictures. It is great to see our bird, now 13 years old, looking so fit and well, only his ring a bit faded. The down-side, that many have commented on, is the amount of plastic rubbish cast up on a beach that is relatively remote.

Crossed fingers that he has made his way back again and will be rearing more Bassenthwaite bairns North of the Border this season.