Both our young Ospreys are now in Africa. Number 15 crossed the Alboran Sea (area east of Gibraltar) on Tuesday and roosted that night in Morocco.

Number 14 has now crossed the Sahara Desert and has entered the Niger River system just north of Bamako – another Quiz answer? Bamako as everyone knows is the capital city of Mali with a population of 1.8 million. Fortunately our bird was last recorded as being thirty miles to the west but approximately six hundred miles due east from the Gambian coastline. If he continues flying south he could enter Liberia or Sierra Leone. 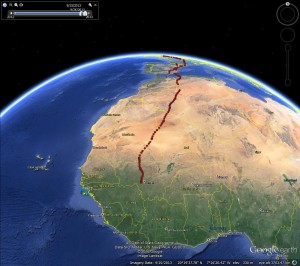